In the last year I decided to share my learnings more publicly. What had started out as a simple idea has led to meeting new people and inspired me to try new things. They year did not start with a strategy, just a few vague goals and an aim to take a path and see where it leads. There were many dead ends but a greater amount of opportunities.

This post is a reflection on the last year.

At the start of 2021 I set out with a modest goal of creating one blog post per month. It was a pace that I thought was realistic and achievable. Most months I managed to get a post ready early in the month, in others it slipped to the end as other things took priority.

I chose the topics based on challenges I had during that month or something from my backlog. Over the last year I signed up for a few community posts such as Azure spring clean and C# advent that kept me motivated and helped steer the topics.

Traffic has mostly been organic from the US and UK though it is exciting to see visitors from all over the world. Of the 14 pots the most popular this year have been:

A side effect of blogging is that the posts became a springboard for community talks. More unexpected was that when I started looking for new roles at the end of the year I could signpost people to the articles to read more.

Building on my process in the coming year I want to try and post at a more regular time frame to avoid feeling pressured at the end of the month to post something.

Learning to confidently speak in front of a group of people and articulate information in a clear way is a key skill for any engineer. At the end of 2020, I read TED Talks: The Official TED Guide to Public Speaking. With the pandemic forcing user groups online I decided it was the perfect time to continue expanding my skills in this area and share my experiences.

This year I presented about 11 speaking events, mostly short lightning talks but also a podcasts and longer form talks. I would like to say a thanks to Dev SouthCoast, Leeds Sharp, Azure User Group Sweeden, Welsh Azure User Group, DDD conference, Southcoast Summit and everyone else who invited me to talk at their events this year. The lightning talks are a great way to get started and the local user groups are all so welcoming. If you have not done a talk before, have a look at trying a lightning talk.

During 2021 I was also invited to talk at the SEACOM:Global Agile Conference to talk over Team Topologies at PureGym expanding on the case study I had previously done. This is a topic I really enjoy talking about and it is great to share how the theory of the Team Topologies book has worked in practice.

Due to the pandemic, I only managed one in-person event this year, South Coast Summit. This was a great event and presenting in person is a very different experience. I hope we can do more in-person events in the coming year. With online talks, most have been recorded and I have added the video links to my talk list if you wish to watch any back.

Going into 2022 I hope to do more of the longer form talks alongside some shorter lightning talks. There were a number of conferences I was not successful in submitting so there is room for improvement in the summaries of my talks. I also hope to attend more conferences this year as things return to normal.

I have always enjoyed mentoring and helping new people in the industry. This year I joined Bit Project Serverless Camp as a mentor helping new developers get started with an 8 week Azure function camp. It was great to see the progression of the students but also talk and meet other mentors. I also had the chance to help with work on the session content with the organisers. It is definitely something I would recommend and hope I can do again in the future.

In addition during the year I was interviewed by a local university podcast, talking about the industry and a look back over my career. It was great to share my story and hopefully inspire others to join the industry.

The Azure and .NET Community

I have attended user groups and conferences for much of my career. I continued to attend Dev SouthCoast and the DDD conference but also started to get involved in the Azure community.

In podcasts I have listen to this year I have continued to listen to .NET Rocks and Merge Conflict. I have also added in The Unhandled Exception Podcast by Dan Clarke which I would recommend.

A new Online Mini hack started this year and I decided to get involved. Each month a random challenge is set and you have 2 hours to complete it in small teams. It has been great to build something quickly with a mixed group of people. They welcome everyone no matter your experience, even if you want to be in a team just to watch. Again I have met some great people and had some fun challenges.

The biggest change this year was getting more involved with the community on twitter, especially cloudfamily. Everyone is so welcoming and I have learned so much from all the things the community has shared. I have gone on to meet some of these people in person and it has led to learning about new opportunities and events. I have taken part in the Azure Spring Clean and Festive tech calendar which has been great fun. 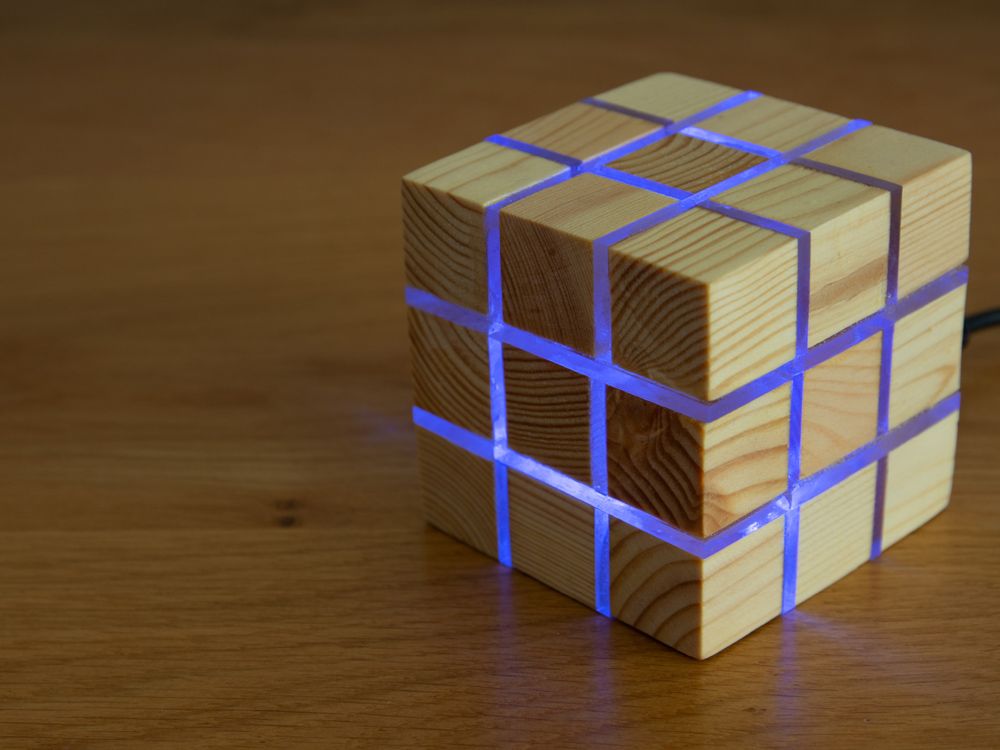 The standout personal project for me was a cube that lights up depended on a user’s status in Microsoft teams. It was a story of trial and error, overcoming many challenges and learning new skills. In total it took about 3 months to complete the whole process but it was so much fun to build.

The first concepts of the cube, based around LEDs in epoxy, ended up in the rubbish before I landed on an idea that worked. I later wrote about this cube build on Instructables which went on to get over 9 thousand views and win a runner up prize in an Instructables competition.

As part of this, trying to imagine 3D objects and the parts needed to build the cube led to me learning blender. I could then model the cube to work out the parts I needed. Once it was in blender I then learnt to animate the construction into an instructional video.

The code side of things was also very interesting and more complex than initially thought. The process of using the push version of the status API was not well documented and I decided to use Azure Logic apps. I later went on to write about this on my blog.

Looking back on the project, if I was to change anything it would have been to use Azure Functions over Logic apps. What started as a simple idea became very complex and could have been easier with a code-based solution.

I have been using Azure for 6 or so years now but working at a single company there were some parts of Azure that we did not use and I wanted to expand my knowledge. I had last looked at Microsoft exams 15 years ago and had not gone back to them; however, 2021 was the year I thought I would take another look.

It’s not a surprise that so much has changed since then. There were so many great resources available for free. I also found that the cloud community was great support and really encouraging. As part of learning, I set up a learning group inside the company I worked at, something I would recommend to others.

On my journey I started with the Azure AZ-204 Azure Developer exam rather than the AZ-900 Azure Fundamentals exam. Looking back I think I would have been less nervous if I had eased back into the exams by using AZ-900.

Following this, I took the two Exams for the Azure Solution Architect. I am glad I took these although in retrospect coming from a developer rather than an ops background I was a little naive on how many of the topics were focused around operations activities such as Azure migrate. Microsoft has adapted the Exam path so Azure Solution Architect is now an extension of the Azure Network Administrator which I think makes this clearer. Overall it was a really beneficial experience and I learnt a lot. In 2022 I may look at some of the fundamental exams to broaden my knowledge into new areas.

Finding time to get involved is often a challenge. This year I took the advice of a friend and set aside one evening a week dedicated time to work on items for my blog or talks. Towards the end of the year I did over commit. After some rejected talk proposals I submitted a wider range however they then were accepted and I attempted to do them all.

The key lesson is to keep to things that motivate you, set aside a regular time and be confident to say no to things if you are too busy. Things I hope to be better at in 2022.

The big change for 2022 is a new job. I have been in my current company for over 6 years, I joined as the first engineer and helped grow the team to over 40 while architecting the software. The time has come however for new challenges and I am super excited about the new role that I start at the beginning of February.

As for projects and new content, as always I will continue to take a path based on what happens. That said, in the world of Azure, I would like to look more at Azure container apps and Dapr but also Azure Web PubSub and more around Cognitive Services. No doubt there will be a lot of new things that are released that will also be interesting.

As I enjoyed the status cube project and am thinking about what I should tackle for 2022. I have always wanted to build an RC hovercraft even purchasing a book on it a few years back. Since then I have seen a number of videos of 3D printed craft and have an idea of combining this with an Arduino. So hopefully 2022 will be the year I get a chance to build this project.

It’s been a great 2021, I have shared more in public than before, met many new people and had great conversations as a result.

Taking a path and seeing where it goes has worked well, managing setbacks and moving forward.

I look forward to sharing more in 2022 and seeing where the path takes me.

Sending emails in Azure Functions is relatively straightforward using the SendGrid output binding. There is even a visual studio SendGrid…

Breaking up Monolithic Websites with Azure

I recently presented on the topic of Breaking up Monolithic Websites with Azure and I thought it also worth sharing as a blog post. If you…